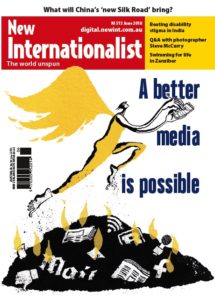 Not so long ago, reporters ‘becoming the story’ was taboo, journalists writing about the media, a navel gaze too far. Leave that to the academics.

But, like it or not, today’s chaotic and unpredictable media landscape is a news story in its own right. And one that contains several key elements of drama – including existential threat. If you include social media platforms – now the most common means by which people access news – hardly a day goes by without a novel twist or dire warning, thanks to their activities.

So, for this month’s Big Story we set aside the old taboos and tackle the topic head on, taking an emphatically solutions-oriented approach.

Which can also be said of Divyanshu Ganatra, a clinically blind outdoors enthusiast, who is featured in the Making Waves section. He has started an adventure-sports, not-for-profit organization for those experiencing disability-related stigma in India. While this edition’s Country Profile takes us to Costa Rica, where we catch up with the unexpected election victory of President Carlos Alvarado Quesada, who beat a socially conservative, evangelical Christian opponent, tipped to win after whipping up popular sentiment against gay marriage. All of which reminds us that even in these most gloomy of times, you never quite know what might happen next. It might even be something good.