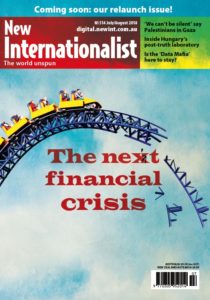 Ten years ago I took an entry-level economics class at school. It was September 2008. Lehman Brothers had just filed for bankruptcy. ‘It’s certainly an interesting time to be studying economics!’ the teacher said. It was – but you wouldn’t have known from the syllabus. There was nothing about the financial system. There were, however, plenty of elegant abstractions, showing the intersection of supply and demand in a timeless, spaceless universe.

This blind spot for finance, I discovered researching this issue, extends to the economics profession generally. More worryingly, the complexity of the financial system eclipses even its practitioners. Fabrice Tourre, the only Wall Street trader convicted of anything in relation to the global financial crisis, sent off an email to his girlfriend in 2007 when he knew something was wrong: ‘[I’m] standing in the middle of all these complex, highly levered, exotic trades [I’ve] created without necessarily understanding all of the implications of those monstruosities [sic]!!!’

Fortunately, there is a growing constituency of progressive, unorthodox economists who do understand these exotic monstrosities. And when I reached out to them to speculate about possible candidates for the next financial crisis, they were all too ready to contribute: the Eurozone, trade wars, shadow banking, central banks… At least next time we won’t be surprised when it happens.

A positive prospect on the horizon is the redesigned and relaunched New Internationalist. From September 2018 we will become a bimonthly publication, giving us more space to go in-depth, with long-form features, more visual treatments and, as always, a rigorous sense of inquiry into the political, economic and social issues of our day and our world.